The Rocky & Bullwinkle Show (known as Rocky & His Friends during the first two seasons and as The Bullwinkle Show for the remaining seasons and as Rocky and Bullwinkle and Friends right now) is an American animated television series that originally aired from November 19, 1959, to June 27, 1964, on the ABC and NBC television networks. The series consists of three segments; Rocky & Bullwinkle, Mr. Peabody's Improbable History and Dudley-Do Right of the Mounties. Each segment is five minutes long. Other segments include Aesop and Son and Fractured Fairy Tales.

Rocky & Bullwinkle is known for quality writing and wry humor. Mixing puns, cultural and topical satire, and self-referential humor, it appealed to adults as well as children. It was also one of the first cartoons whose animation was outsourced; storyboards were shipped to Gamma Productions, a Mexican studio also employed by Total Television). Thus the art has a choppy, unpolished look and the animation is extremely limited even by television animation standards at the time. Yet the series has long been held in high esteem by those who have seen it; some critics described the series as a well-written radio program with pictures.

This segment tells the tales of Rocky J. Squirrel and his roommate, Bullwinkle, a dimwitted and confused moose. Join Rocky and Bullwinkle on their amazing adventures as they take on evil enemies, Boris Badenov and Natasha Fatale, spies for the fictional country of Pottsylvania and their boss, Fearless Leader. This is the first TV series to have an overarching story.

This segment is a clever twist on the relationship between a pet and his master. Join Mr. Peabody, the world's smartest talking dog and his best friend, a simpleminded young boy named Sherman as they travel through time in the WABAC time machine--saving history's greats from obscurity and ensuring the accuracy of our past!

Dudley Do-Right of the Mounties

This segment is a parody of early 20th century melodrama and silent film serials of the Northern genre. Dudley Do-Right is a Canadian Mountie in constant pursuit of his nemesis, Snidely Whiplash, who sports the standard "villain" attire of black top hat, cape, and over-sized mustache. This is one of the few Jay Ward cartoons to feature a background music track. As is standard in Ward's cartoons, jokes often have more than one meaning.

This segment is similar to Fractured Fairy Tales, complete with the same theme music, except it deals with fables instead of fairy tales. The typical structure consists of Aesop attempting to teach a lesson to his son using a fable. After hearing the story, the son subverts the fable's moral with a pun. This structure was also suggested by the feature's opening titles, which showed Aesop painstakingly carving his name in marble using a mallet and chisel and then his son, with a jackhammer and raising a cloud of dust, appending "And Son." Aesop was voiced (uncredited) by actor Charlie Ruggles and the son, Junior, was voiced by Daws Butler.

Bullwinkle attempting to introduce culture into the proceedings by reciting (and acting out) poems and nursery rhymes, inadvertently and humorously butchering them. Poems subjected to this treatment include several by Robert Louis Stevenson ("My Shadow", "The Swing", and "Where Go the Boats"); William Wordsworth's "Daffodils"; "Little Miss Muffet", "Little Jack Horner", and "Wee Willie Winkie"; J. G. Whittier's "Barbara Frietchie"; and "The Queen of Hearts" by Charles Lamb. Simple Simon is performed with Boris as the pie man, but as a variation of the famous Abbott and Costello routine "Who's on First?".

Bullwinkle posing as an authority on any topic. Disaster inevitably ensues.

A series of abortive attempts by Rocky and Bullwinkle to conduct club business. The fan club consists only of Rocky, Bullwinkle, Boris, Natasha, and Captain Peter Peachfuzz. These shorts portray the characters out of character.

Main article: The Adventures of Rocky and Bullwinkle

In 2000, a film based on Rocky and Bullwinkle film was made. It was a mix of CGI, 2D, and Live Action. It was about Rocky and Bullwinkle teaming up with an FBI agent to stop Fearless Leader from taking over the world. The movie stars Robert De Niro, Jason Alexander, Renee Russo, and Piper Perabo. It also features cameo appearances by Kenan and Kel, Whoopi Goldberg, John Goodman, Billy Crystal, and David Alen Grier. This got mixed reviews and was a box office flop. 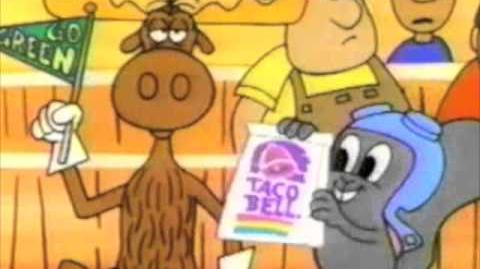 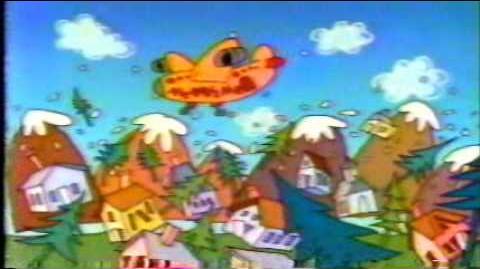 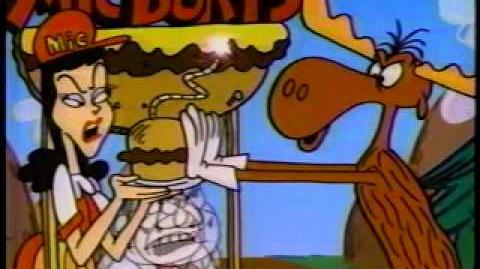 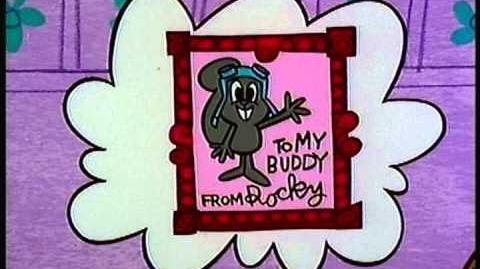 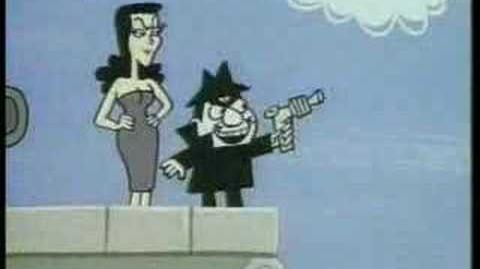